How close are we?

/
We've each donated an organ to Hoto Hip, grit, power and tenderness–Bradley/McGillivray Blues is one of Vancouver’s live music treasures, fusing blues, jazz, funk and gospel into their signature brand of soul.

Ruth McGillivray’s knock-you-flat vocals are a force to be reckoned with. Tastefully interwoven with Sheldon Bradley’s unique blend of citified jazz and gritty blues, these two will will slay you one moment and break your country heart the next. The whole sound is rounded out by an inventive rhythm section featuring funk-masters Paul Freeman on bass, and Hoto Parker on drums and percussion.

For Bradley/McGillivray, the blues are more about attitude and resilience than genre. Influenced by artists as diverse as BB King, Jon Cleary, Janis Joplin, Merle Haggard, Aretha Franklin and Etta James, they showcase an eclectic repertoire of original music and fresh takes on old favourites. They’re tight and polished, but connection trumps script–expect warmth, laughter and authenticity in every show. A band of music lovers for an audience of music lovers.

The band’s debut CD, River of Soul, was released in September 2003 and featured their first collection of original material. It received critical acclaim, 4-star reviews, and a nomination in the Jazz/Blues category of the Shai Awards. Their second CD, Livin’ This Way, was released in 2008. Produced in Vancouver, B.C. by award-winning producer Bill Buckingham, Living’ This Way features nine original tunes, a unique, signature version of Tennessee Waltz, and an interpretation of Piece of My Heart of which Tom Harrison of the Vancouver Province said Ruth “makes the song her own”.  Both Canadian Musician and Real Blues Magazine cited Livin’ This Way as “one of the best Canadian blues albums of 2008.”  Their third album, Snapshot (2017), features blues, funk and soul classics peppered with Bradley/McGillivray signature twists.

Impressed as much by the life of Etta James as her music, Bradley/McGillivray recently began performing Echoes of Etta, a show they created that weaves the story of her life through their own arrangements of featured tunes from her songbook. They return to the studio in 2020 to record several  signature songs from that show for the Cellar Live jazz label. 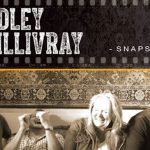